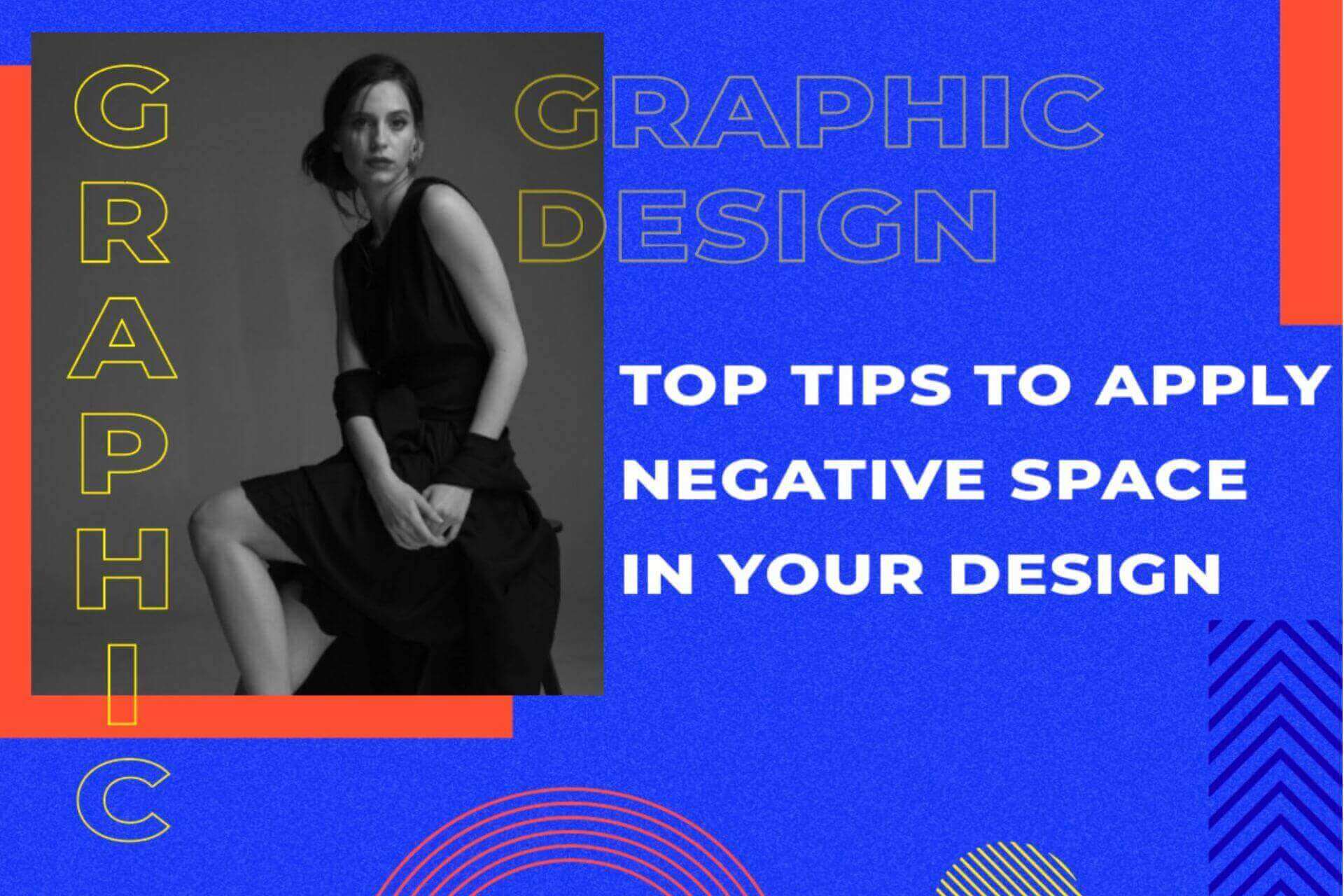 We frequently believe that being silent, empty, or colorless is harmful to us. Without realizing it, we take them for granted even though they provide a sturdy base of contrast. The value of the sound can only be understood in stillness. We can only comprehend what we want to fill a space with. When colors are displayed on stage, only colorlessness allows us to perceive them as brighter and more vibrant. Only the absence of air can tell us how important it is. Today, we’re going to discuss air in design. Let’s talk about the space.

Negative space also referred to as white space, is the section of the design that is left empty. It could be not just inside and between the items you’ve placed in the arrangement, but also surrounding and around them. For all the elements on the page or screen, negative space serves as a sort of breathing area. Gestalt principles, not only establish the boundaries of the objects but also forge the connections between them that are required for efficient visual performance. White space is a legitimate design feature that has a significant impact on a positive user experience as a result.

According to Mads Soegaard of the Interaction Design Foundation, “negative space is like a canvas: it’s the background that keeps the parts in a design together while allowing them to stand out.” In graphic design, negative space is frequently used in logos, illustrations, posters, and creative writing where it plays an active role in the visual presentation and enhances the expressiveness of important visual elements.

For instance, the moon in the blog graphic below fulfills the job of contrasting negative space, giving the astronaut a more vibrant and dynamic appearance. Negative space plays a major role in the usability and navigability of the interface when it comes to designing user interfaces for websites and mobile apps. The area between layout elements and inside them (for letter and stroke elements) is referred to as micro space, whereas the space surrounding them is known as macro space.

Negative space: Why Is It Important?

Imagine entering a room that is crowded with numerous employees. Stacks of books and clothing, cartons and bags, and a cluttered desk are all present. Will you be able to focus under such circumstances? Are all those items necessary right now? How long will it take and will you be able to find what you need? That’s pretty much how users feel when they open a page or screen without the necessary amount of white space.

Clients and some designers can desire to cram as many components and functionalities as they can onto a single page or screen in the hopes that doing so will win the game and benefit the client. But that’s incorrect because people don’t require everything at once. Furthermore, having too many elements without appropriate space dramatically increases the amount of distraction because users will have to work harder to identify the elements they DO need because they are bombarded with information and interactive elements, the majority of which they DON’T require. If everything shouts for your viewer’s attention, nothing is heard.

We could list the following advantages of thoughtful use of negative space in design:

Readability and legibility:
If there is not enough room between the elements, it is difficult to read them and it takes more work to read them. Even though many users won’t be able to formulate the issue, it may be a significant cause of eye and brain tension. This issue is resolved and the process becomes more natural when there is an appropriate quantity of negative space, especially micro space. Therefore, negative space has a direct impact on how effectively typography reads on a page or screen. Pauses serve the same purpose as tones in music. Similar principles apply when reading properly positioned empty spaces making the text simpler to understand.

Nature of the resource:
A negative space’s nature affects what is commonly referred to as design tone. The front page of a news resource, for instance, will have less white space than a blog to create the impression that the platform is full of dynamically appearing data.

Attention ratio:
To maximize visual hierarchy and facilitate user concentration on the important parts, there should be sufficient negative space.

Based on this, negative space influences how people perceive visual elements including identification, navigation, and graphic and copy content.

2. How to Apply Negative Space in Your Design?

Risks to Take into Account while using negative space:

2. Make it work
Why does a zoo’s emblem feature a lone tree? Well, if you look at the logos for the Pittsburgh Zoo and PPG Aquarium a bit more closely, you’ll notice that the area around the tree forms a gorilla and what appears to be a lioness. Is anything else that you can see?

3. The Testimonies
Noma Bar is renowned for using negative space in his illustrations, and the cover he made for Margaret Atwood’s The Testaments is no different. You can spot another figure hiding if you look attentively at the hooded figure’s robe, for instance. The Handmaid’s Tale by Margaret Atwood features a striking book cover created by Bar.

4. Cut-Outs
Batman squares off against the Penguin in this fantastic picture by graphic artist Simon C. Page. The artwork, which is a part of his Cut-Out series, skillfully uses negative space to represent the two characters. Danny Devito’s Penguin can be recognized right away by his bald head and long, pointed nose, which in turn makes Michael Keaton’s Batman stand out in a striking silhouette.

5. FedEx
Without mentioning possibly the most well-known application of negative space in a logo, this list would fall short. Once you’ve noticed it, the white arrow in the FedEx logotype between the letters E and X is impossible to forget. The logo, which was created by Lindon Leader in 1994, has earned numerous design honors and is frequently mentioned in lists of the “greatest logos.”

Even if it’s been said before, it has to be repeated. Remember that there are other colors in negative space besides black and white. It might be any color under the sun. If anything, adding additional drama to the design may be achieved by using different colors for your negative space. Consider arranging a row of vividly colored lemons on a background of beautiful blue. Or by displaying a picture of a young woman dressed in yellow and blue next to a shimmering green wall.

Don’t be scared to experiment with color. Why not do it if it’s the most effective approach to bring drama to the design? Finally, the usage of negative space will be determined by the designer’s grasp of human nature. You must learn how to grasp how people see things visually and how to perform tricks on their eyes to capture their interest. There are no hard and fast rules to follow, and it all depends on how daring you want to be.

Finally, keep in mind that space is not always a bad thing in design. If a single dot in the middle of a wide blank expanse is all that is required to express your message, then so be it. Find more examples of negative space on illustAC.